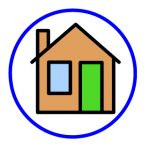 Through childhood and growing up into early adulthood Amy was often excluded from services due to behavioural challenges. Amy moved in to her own home on 28th November 2016.

Through childhood and growing up into early adulthood Amy was often excluded from services due to behavioural challenges.

As Amy grew up Grandma said that she would want Amy to move-on from the family home as she recognised that she could not sustain the role of carer indefinitely and did not want Amy to be in a position where any decisions about her future were made in an emergency.

Ansar and Forward Housing were approached in 2016.

Grandma was very involved in choosing the house for Amy. Once work was underway Amy became very involved. Visiting the house regularly, she developed a routine of having a drink of Ribena whilst she was there – this association with home remains today!

Amy has a consistent team around her, with new people slowly introduced as needed.

Amy now accesses her local community regularly and is making purchases at the local shop. She enjoys long country walks, giving her a true sense of independence. She also visits safari parks. Whilst enjoying the outdoors, she has a number of indoor activities too! – Rebound Therapy sessions which support Amy with her sensory awareness and she regularly goes swimming.

To help Amy try new things the team work through Social Stories⁶ to introduce her to new places and activities.

Working closely with Speech and Language therapy, Amy’s team encourage and engage her in conversation and storytelling in-line with her assessed level of language comprehension. Amy is responding well to instructions and new strategies are successively reducing a physically aggressive response.

Learning with Amy in her own home, the team feel that the next step is to have a more open-plan house to better meet her sensory needs and with the additional space to offer less disruption to Amy currently caused by her support staff being present in her lounge overnight. The team are working closely with Amy and her circle of support, including Grandma, who agree that, with careful preparation, a move would be a great success.

We work closely with a range of professionals in developing the right support strategies and approaches for Amy.

Following a recent visit the following email was received:

I just wanted a catch up with regard to my observations of Amy yesterday. It was an absolute delight to see Amy in such good spirits, she was just so lovely, the staff supporting her were fabulous, their responses, putting Amy in the middle of everything, really lovely to see.