Jack, who is supported by Ansar Projects, came up with a wonderful idea to create a time capsule! 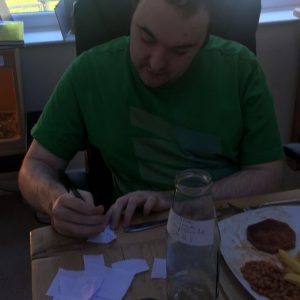 Jack was inspired to make his time capsule when he was baking one day. With the support of his support worker, Ben, Jack wrote down special notes of everything he wants to do next year. He then placed these notes into a glass bottle. He has hidden it under a large arts and crafts box.

Some of the experiences that Jack noted down included: going to the gym and visiting pubs and restaurants when they are open. He also wants to watch films in the cinema and try bowling!

Jack also can’t wait to visit his mum and dad, as well as hopefully going on holiday in September!

He will open his capsule at the end of this year, or the beginning of next year to see what he is achieved.

Jack, this is such a brilliant idea and reminds us all to make the most of everyday. Make a time capsule too!