A group from The Camden Society (TCS) have raised money for a cause close to their hearts by taking part in a festive fun run.

The event, held at Wykham Park Academy in Banbury, attracted about 350 participants. People were able to choose from either a 5km or 1km route and everyone taking part received a Santa suit for the run and was awarded a medal upon completion.

The money raised will help support the hospice in running its inpatient unit over the Christmas period.

Gail Hill, Service Manager for Supported Living in Oxfordshire, said, “The hospice is close to our hearts, as about a year and a half ago one of the people we support spent their last few weeks there. Since then, we have built up a good relationship with the organisation and when we heard about the fun run, we thought it would be a great way to show our support and appreciation.” 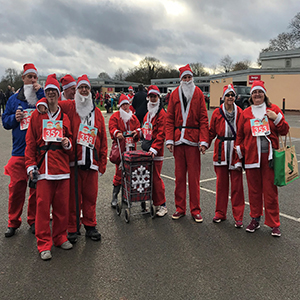