Being a Non-Executive Director: Michelle’s story

Michelle has a paid job at VoiceAbility and she has worked in different posts during the time she has been employed.

Thera Trust approached VoiceAbility as they were looking for a Non-Executive Director to join the Thera East Anglia Board. VoiceAbility then approached Michelle as they believed she would be a good fit.

Michelle had not been a Non-Executive Director before but she knew it would involve board meetings, which she has previously done in her role at VoiceAbility. 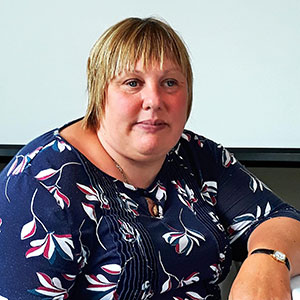 Michelle likes that Thera do what they say they do: the organisation does exactly what it says on the tin. Thera are very person centred and they are all about the person who is being supported.

In her role Michelle enjoys being able to have a say about the company and discuss any issues at the board meetings and solve them the best we can for the people we support.

The role also involves meetings, home visits and visiting Oaklands, which provides support to people during the day and for short breaks.

Michelle has thought about being a chairperson one day as she has done the role before at Voice Ability, so she has the experience and knows what to expect.

Michelle says: “To anybody with lived experience of a learning disability considering becoming a Non-Executive Director, I would say give it a go. If you have a chance to do something, then go for it!”

To find out more about the role of a Non-Executive Director please visit https://www.thera.co.uk/get-involved/non-executive-directors/